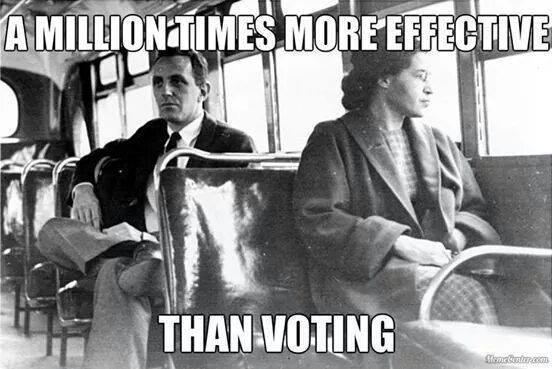 It’s quite simple really; voting is using the monopoly of violence within a given land mass to impose the opinions of the majority.

Why does the State give us the “right” to vote if it is such an uncaring tyrant?

Well, allowing people to vote gives the State the consent and the illusion of legitimacy that it needs.

It is also long been the single most critical function of government to foment division. All factions of government absolutely need us divided. Politicians do, media does (yes, a part of government these days).

Government also needs us to be afraid. What is more convenient than creating fear of each other?

The Actual Face of Violence

The voter isn’t pulling the trigger on his opponent. The politician isn’t, nor the judge or the bureaucrat, but the violence is absolutely there.

Voting is legitimizing the monopoly government system and does in fact create a division between Law Enforcement (and in some cases, military) and the people it polices. In almost every single instance of history, police are on the wrong side of history and the real perpetrators against its own neighbors. This is one of the most consistent facts in modern humanity.

In the past, rulers gave no such illusion to the people they ruled, but today we continue the same old travesties willingly and with our sanction because of the illusion of legitimacy that is democracy. We are each and every one of us culpable for the crimes against humanity that the State effects.

Activism has the long standing history of being the most effective method of delivering change. The world does in fact favor action over rhetoric. Certainly it takes courage to be the first or the few to stand in opposition of the machinery of government, but many times it seems to take a surprisingly little amount of action to cause change.

In another article, I began to explore the concept of the need to have stake for a vote. For example, nobody should be able to vote on matters of your property without legitimate stake in your property. Honestly, I’m not exactly sure how this could be used, but I often think of the roads problem.

The Roads Problem is a whole article unto itself. Hell, its an entire study but to be as succinct as possible; we use blockchain technology to make decisions, fund, auction land and work all voluntarily and transparently. I’ll get more into that as soon as I can as I think it is a fascinating study in using the tools we have to create a fully voluntary solution for the most primitive of excuses we have for modern socialist government.

Maybe its a pipe dream, but if we are ever going to find out if there are alternatives to the coercive and vastly outdated systems we have today, now is the time to discuss and experiment.

We have the most transformative tools in all of human history at our fingertips right now. We also have some of the most brilliant and industrious people with us today. It is our duty to do what we can to explore and pursue our options.

Join us on our Discord channel: https://discord.gg/5fPatJx